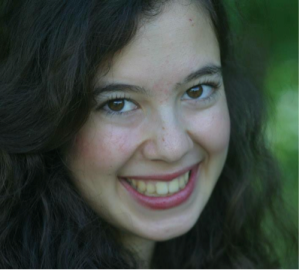 Sarina Farb was Student Activist of the Month for March 2014!

Why are you vegan?

I am vegan for many reasons that are all complex and interwoven, but ultimately veganism is my statement that I don’t support exploitation and violence against animals, our own bodies, and the earth. I’m vegan because I work to make choices in my everyday life that are consistent with values of compassion and non-violence and how I would like to see the world evolve.

Why do you promote veganism?

I promote veganism primarily because I think that we as morally conscious people have an obligation to consider the ways in which our diet and lifestyle choices impact other sentient beings and the planet. I do not believe that any animals need to be brought into existence, exploited, or killed for us to live a happy and healthy life, and that we must overcome this socially accepted norm of using animals and extend our ethics to include all non-human animals as well. Moreover I feel that

consumption of animal products is actually an underlying cause in much of the violence still facing humanity today, as well as global environmental issues and the health care crises countries like the United States are facing. I promote veganism simply because I think it will make the world a better and more compassionate place for all living beings.

What are your hobbies outside of the veg club?

Outside of activism and leading a club which takes up the majority of my my free time, I love reading, running, doing yoga, and playing piano.

What are you studying in school and what do you want to do in the future as a career?

I love science research and I am passionate about activism and public speaking. I decided to major in both biochemistry and policy studies so that I could combine these two large interest of mine in a way that will allow me to effectively create positive change around me. In high school I did a biochemistry research project on the environmental toxin Bisphenol A (BPA; the chemical in lots of plastics and water bottles) and how it effected cancer cell growth. While I was in that lab, I learned just how much animal testing and animal derived products are used in biochemical research. While I would like to continue this type of research on diseases and their relation to environmental toxins and diet, now I also really want to get involved with research on alternatives to animal testing and animal derived goods in science.  My longer term plan is to then apply my scientific background and research to the public policy side of things in a job where I can help implement real changes in health, environmental and animal rights policy.

How was it like growing up in a vegan and activist family?

Growing up in a vegan family and activist family was both interesting at times, and for the most part wonderful. I was home schooled for a large portion of my childhood and part of my parents underlying theme in everything they taught me was, “how are you going to use your life to make the world a better place?” I didn’t realize until much later, that this is not an idea most children grow up with, but it permeated my world view. From as young an age as I can remember, I was excited to go to circus protests with our local veg group, attend local city commission meetings, environmental rally’s and many more.  My parents really instilled in me that we should use our lives to do whatever we can to make the world better. I really took this to heart, and when I was 12 years old I spoke publicly for the first time in front of several hundred people at a rally about why the new proposed coal-fired power plants they wanted to build were a terrible idea. Although my parents were and still are a huge inspiration for me, there were always those interesting moments when I feared that my parents alienated people by pushing their issues too much. Seeing these moments though has really helped me in my own struggle to balance what I care about, and not alienating people.

How do your friends react to your veganism?

This really depends on which friends you are talking about. My closest friends from home are all pretty much vegetarian or vegan themselves, which is wonderful for me. In college though, I just have a few friends from my group that are vegan, and the rest of them are not. Most of them are very understanding though, even if they don’t agree with me.

How is the vegan scene at your school?

The vegan scene at Grinnell is an interesting one. We have a pretty vegan friendly dining hall, and I actually know quite a few vegans, but most of them do it for personal and health reasons, and are not interested in vegan activism. Additionally there is a pretty big number of environmentally and ethically conscious students, and they are very aware of veganism related issues, but oddly the most resistant to them, and most easily offended by the ethical arguments for veganism because they think that small scale animal farming is the answer instead.

How long has your club been around?

It has now been almost a year since I started Advancing Animal Compassion Together.

What types of events and activities have you planned?

We have planned several documentary showings, vegan buffets (to get people to the documentary showings) and tabling with food samples and educational literature. We also have campaigns for education posters in all the bathrooms.  We are currently working to bring a speaker to campus as well.

What have been your biggest challenges?

My biggest challenges have been getting the necessary funding and support for our events when most others on campus don’t view animal rights as a priority, and getting students to attend our events.

What has been your biggest mistake?

My biggest mistake was probably having too many far-reaching goals for the semester. I have lots of great ideas, but I have a hard time facing the reality that I can’t possible do everything that comes to mind in the limited time I have, because I end up over stretching myself.

What was your favorite activity or event?

My favorite event was our catered vegan dinner in conjunction with a showing of the film “Vegucated” for world vegetarian day.

What has been the club’s biggest success?

My clubs biggest success was probably after we showed ‘The Witness‘ to a group of students, and many of them immediately asked how they could get involved and ended up attending our very next meeting!

Who has been your biggest inspiration?

I don’t know that I can really name anyone person here. I have so many people that inspire me, from my parents, to all the wonderful activists and speakers I have met at the vegetarian and animal rights conferences I have attended.

Have any books or philosophies or people been important to you?

The philosophy of Ahimsa tied into veganism has been a very important idea in my life. It is the idea that we should all be doing the least harm we possibly can in the world, while at the same time doing the most good. My parents even called our home school “Ahimsa Home School”.

Why is in-school activism important?

In school activism is extraordinary important because often younger children and teens are more receptive to the ideas we are presenting. There is also research showing that it takes up to 7 times hearing something for the message to really sink in, so the younger that individuals get our message, the sooner it can start to sink in!

Do you have any tips for youth who want to go vegetarian or vegan? What advice do you have for other youth activists?

Join a meet-up group, or find other vegans/activists! It is so important to surround yourself with others that share your values and can help encourage you in your goals.

Sarina Farb—March Activist of the Month